Admittedly I spent a lot of my modeling time last year working on P48 projects, a departure from my HO Layout The Industrial Lead. However I did manage to get quite a bit done on the layout this year.

My previous post Cans, showed a little work I was doing weathering around fifty 40’ & 20’ containers for the layout. The purpose to those containers to act as scenic elements around the SIG intermodal facility, primarily as a view block for the area where the track pokes through the wall and enters the closet.

Another project that I never really followed up on was the Arctic Refrigeration building. I did post a blog about building the awning in an earlier post Dock for Cover. The building is the first I cut with my Cricut out of styrene. It’s a very simple warehouse, that I painted to match its appearance in the mid 2000s. I also finished the background office building which is not prototypical, but I wanted something with a little height to obscure the highway meeting the wall.

I’m not sure if I ever covered the highway 99 freeway in a previous post elsewhere, but it’s an integral part of the scenery. The overpass spans Hanford Street and has an unauthorized skate park built below it. I modeled these with styrene. The freeway is complete, but the skate park still needs some work.

I’ve posted about my Maxim Mock-up, but I never really followed up on the first building. I decided I like the warehouse mock-up and painted it and added doors.

I also made an attempt at the main Maxum building using a base of chipboard, clad with styrene sheet. This isn’t really turning out how I want it to, primarily because I couldn’t get the chipboard square enough. I’ll be redoing this building completely in Styrene in 2022.

I’ve spent the last month weathering and decaling my tank car fleet. Most of the cars needed reflective stripes and updated tank car data stenciling. The weathering is mostly complete and I’m slogging through the decals. 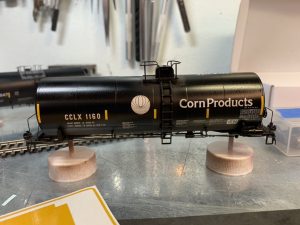 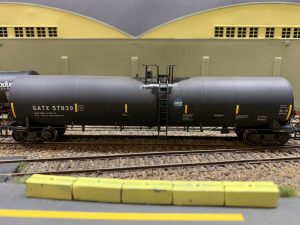 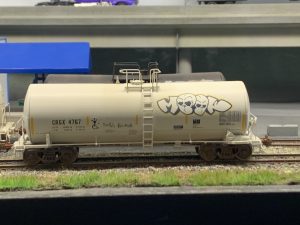 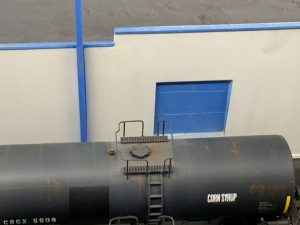 I am setting a goal to complete the layout in 2022. Things to do:

I am toying with the idea of building a second deck layout above the Industrial Lead. Basically I will drop the lighting valence 4-6 inches and use the space above the layout for an O scale layout that’ll be about 70” above floor level. I already want to lower my lighting valence to give the industrial lead a smaller viewing angle so this could be a 2 birds with one stone approach.

Some comparison mock-ups showing the lighting valence lowered 4” as viewed from my eye level. 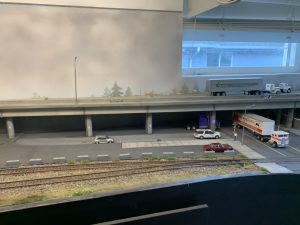 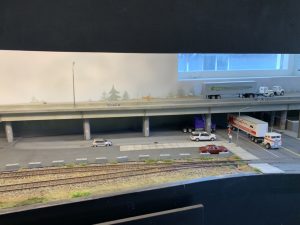 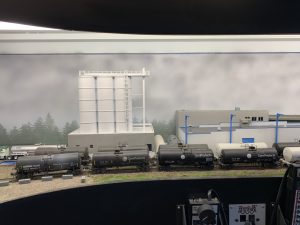 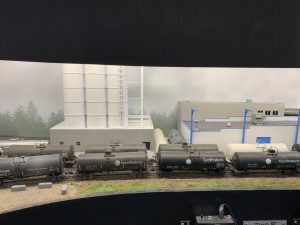 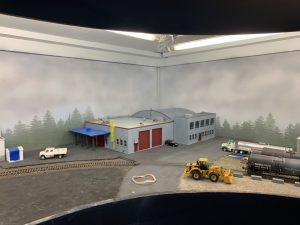 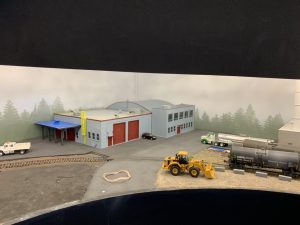 Thanks for following. Merry Christmas and Happy New Year!