A few months ago I saw Shawn Branstetter”s Building a Right O’ Way Switch Kit post in his Shortline Modelers Blog and really wanted to try it out. The kits were not on the Right-O-Way website, so I reached out to Jay Criswell to see when I could get one. Luckily Jay had some in stock so I immediately jumped on a #6 turnout kit, with ties & details as well as the tie placement template. $100 for the skeleton (rail, points, throw bars, frog, guardrails all held together by pcb ties soldered to the top of the rails). $25 for the detail kit (which is basically the tie plates, gauge plates & rail braces). $7 for pre-cut ties. $40 for the tie placement template which is a sturdy acrylic? reversible and reusable template. I also purchased 800 spikes for $6.25.

It took a few weeks to get started on this build this turnout. Partly because of time constraints but also because I was trying to come up with the best substrate to build the turnout on. I wanted something that was lightweight, durable, wouldn’t warp and could take glue, tape and paint . I had built a P48 turnout using cork faced foamboard a few years ago, but I had trouble sourcing the same product.

I found 10mm EPS foam at the craft store and thought it would be a a great solution. Sold as cos-play foam, EPS is a semi-rigid lightweight craft foam. EPS foam tested well and seemed to fit all my desires it was lightweight, I could adhere ties to it with double sided tape, as well as super glue, and was easy to paint. The one thing I didn’t think to test was how well I could spike ties on this semi-rigid substrate. Also, it doesn’t hold spikes. I’ve seen many discussions about how some material holds spikes and didn’t really understand what all the fuss was about. Now I do. Spikes seem to float right up out of position with EPS foam.

This whole portion of the build took 1 hour! The pre-cut ties and template saved me a ton of time and effort, my previous turnout took several days to get to this point as I measured each tie distance and cut each tie to length.

My most time consuming portion of any turnout I’ve built has been tie placement and spiking. While this method offers no way to speed up the spiking (that I’ve figured out) it does really help speed up tie placement. And that was the key benefit I was hoping to get from constructing a turnout using this method. Essentially I was able to use the skeleton and the pre-laid ties as a template to glue most of the tie plates into place before spiking. I also took a HUGE tip from Shawn Branstetter and soldered the brass parts into place first. I also took this opportunity to solder feeders to the rail.

Another time saving idea I considered was painting. I already paint my tie plates while they are on the sprue. Painting the rail before mating it with the ties seemed like it would be a big benefit. After soldering on the rail braces I painted the skeleton a Rust-oleum red/brown primer color.

Once I had the basic tie plates installed and the rails painted I began spiking. I used the P48 track gauge as I spiked along to make sure I was in gauge or to see if I needed to make adjustments. This is where I realized that EPS foam is not a suitable roadbed. As I was spiking, the EPS foam was not rigid enough to withstand the force and frequently just collapsed beneath the pressure. I also realized the Micro-Engineering spikes were not my cup of tea. The head is too long & they frequently bend along the shaft. They are also ribbed (I imagine that feature was to help them hold), but the they don’t hold well. And they frequently destroy the ties you are spiking into.

I also experimented with:

Once a sufficient number of ties were spiked to hold the rail, I removed the PCB ties soldered to the top of the rail. They were a little more difficult than I imagined they would be. I stripped all the paint from the area, coated them in flux and sweated them for several minutes at 890* while pulling at them with pliers.

Because every prototype turnout I’ve ever seen has some kind of bracing for the guard rails. I decided to use some rail brace castings as guard rail braces.

Despite trying to separate the finishing process I found I made enough changes to require repainting the rails so I masked the ties and hit the rails with Vallejo 70.603 German Panzer Grey primer. It was dead flat. This will be my go-to from now on, I’ll skip the Rus-oleum rattle can as it didn’t adhere well and left a glossy finish.

I mentioned before that the initial sub-roadbed cutting, tie laying and tie staining took 1 hour! I spent about one hour laying tie plates. Spiking and adjusting tie plates took about 6 hours. Masking the ties and painting the rails took about 1 hours. Essentially I built a fully detailed and functioning turnout in a week. Not bad at all, considering I’ve spent well over a hundred hours on my previous P48 turnout, which is still incomplete. 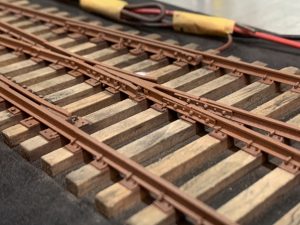 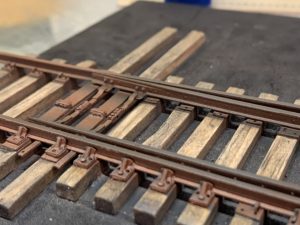 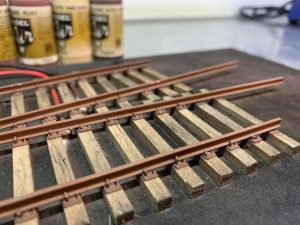 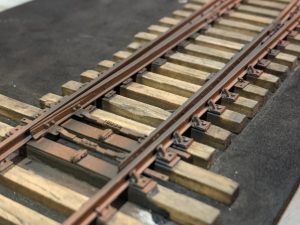 I was planning to ballast this turnout and add a working switch stand. It turns out the ballast I found is super ferrous, I spent hours sifting it this week and when I run magnets through its crazy how much material sticks to the magnets. I think I’ll have to find another source. I purchased the Right-O-Way Operating Raycor Switch Stand. Maybe my project for next week.

Thank you Jay Criswell for continuing on with Right-O-Way. Lou Cross should be proud. You are a top notch person to work with, just as Lou was.